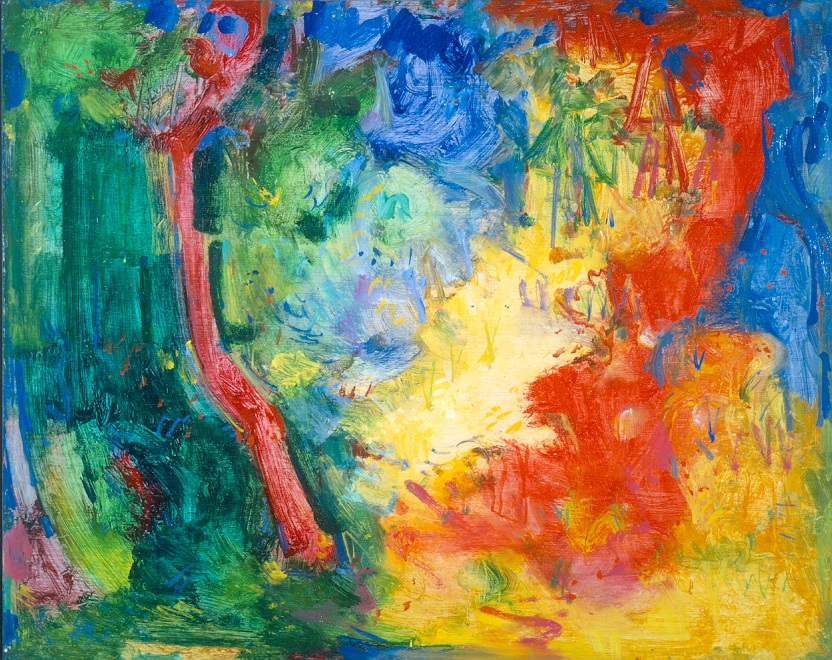 Gift of May Gruber in Honor of Marilyn F. Hoffman

When I look at Landscape by Hans Hofmann, I imagine the extraordinary circumstance of its making -- a war is raging in Europe, and Hofmann, a native of Germany, is here in the US on the shores of Provincetown, Massachusetts. It’s beautiful summer day on the Cape. Hofmann is alone on the dunes, palette in-hand, plywood panel attached to a wooden easel. He’s painting with the gusto of a person half his age. He’s 60 years old.

Since Hofmann opened his famed school of art in Munich in 1918, he’d made a habit of transplanting operations to picturesque locations during the summer—students from Europe and America were known to join him by the scores. By 1940 when Landscape was painted, Hofmann was settled in the US. The Hans Hofmann School of Art traveled between NYC and P-town during the summer. Hofmann taught a dynamic blend of cubism, color-based expressionism, and abstraction. His students were totally devoted to him.

What I love about Landscape is its bold use of primary and secondary colors—reds, yellows, blues and greens—painted in emphatic, gestural strokes. Reds push against complimentary blues and greens. Yellows establish a middle ground. And, what has Hofmann captured? An abstracted view from high up on the dunes, to where the cool blue Atlantic meets the golden heat of summer sands. Wind blasted pines and grasses are scattered throughout in Hofmann’s playful calligraphic notations. The singular form that anchors the image is the diagonal red line that bisects the painting from the upper left to its mid-section—is this a totemic pine? Perhaps. Hofmann doesn’t make it easy—he’s more interested in the expression of landscape, than its mere illustration.

Hofmann would return to these dunes hundreds of time in the 1940s, painting the landscape that he loved. Through his teaching and painting, Hofmann helped to establish America as the home of advanced modern painting in the middle 20th century.